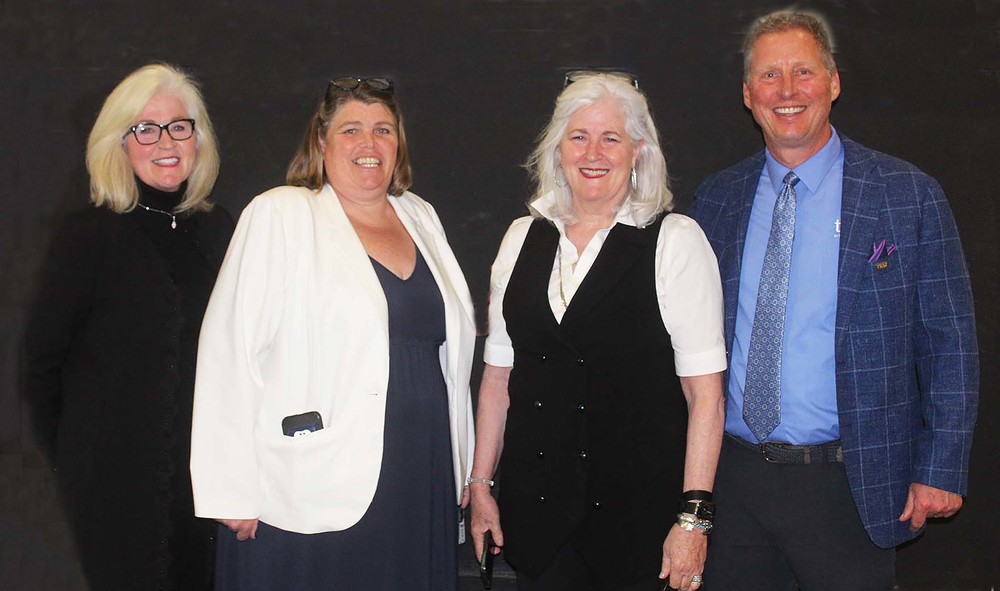 Twin sisters, Regina Gardner Milan, and Rita M. Gardner, Class of 1979, Ken Grohe, Class of 1985, and Kathleen Paulding, Class of 1990 were introduced as the newest members of the post-high school Hall of Fame.

Before the honorees were introduced, Joseph Waisgerber, former RHS guidance director, who passed away in January, was recognized as the founder of the Hall of Fame.  At the time of its inception in 1988 the Hall of Fame was one of only a few in the area; the Hall now has 102 RHS alumni and honorary members.

Mr. Waisgerber’s wife, Mary Lee Waisgerber, their son, Steve and their daughter Carol were present. Steve, a Class of 1978 graduate and Hall of Fame member, spoke about his father’s impact as a teacher, coach, guidance director and member of the Rockland community.

Next, the inductees were introduced by members of the Hall of Fame committee.

Regina Gardner Milan is the owner of a graphic design firm: Milan Design.  She is also an associate professor of graphic design, and is an accomplished botanical artist.  She said her family, teachers and the community in Rockland contributed to her work ethic and subsequent successes.

Twenty years into her very successful career in the field of graphic design Regina was encouraged to get into education. She is now an Associate Professor at UMass Lowell teaching upper levels of Typography, Motion Graphics, Graphic Design and Senior Studio.  At UML She revamped the Graphic Design curriculum and is today the Program Coordinator for the Graphic Design department.  She said that she loves sharing with her students everything that she has learned in the design field.

Rita Gardner is CEO of Melmark Inc. Melmark is a multi-state, nationally recognized provider of special education, clinical and consultation services, vocational training, and adult day and residential programs in service to children and adults with autism spectrum disorders (ASD) and other neurological disorders.

Rita said there has never been a time since middle school when caring for people with disabilities was not a part of her life.  With Rita as CEO, Melmark has been named to The Commonwealth Institute’s list of the Top 100 Women-Led Businesses in Massachusetts for the past three years.

Ken Grohe is a software developer and facilitator who has assisted many companies in the tech industry. Since graduating from Boston College with honors in 1989 Ken has worked in the tech industry as an energetic innovator in each venture he has come across.   He started Viradent to help Linkedin be the platform for business professionals to hire and connect with each other.  He then joined Barracuda to provide web filters to over 165,000 schools to keep web content clean and G rated for students. He founded SignNow as the top rated e-signature company that is used by more than 6 million people daily.

Grohe concluded his remarks by alluding to Rockland High School’s mascot and his own quote in the 1985 yearbook:  “America needs less bull and more bulldog.”   For the past four years, Ken and his wife, Annie have sponsored the Grohe Family Scholarships given to two graduating seniors at Rockland High School.

Kathleen Paulding is the assistant principal at Rockland High School.  She detailed her educational journey from student to teacher to administrator.   Kathy was invaluable to the Special Education Department as an inclusion teacher. As a teacher, Kathy had a great understanding of modified instructional needs. Kathy’s personal  success can be attributed to persistence, goal setting, and strength.  Her professional success can be credited to her foresight in the development and carry through of policy, compassion with students, and unequivocal acceptance and tolerance of students and staff.

Kathy credited her family, specifically her mother and grandmother, who were both long-time teachers in the Rockland school system.

Regina and Mike Quirk of Strategic Financial Services were recognized for their sponsorship of the Hall of Fame this year.  Regina Quirk is also the president of the Rockland Education Foundation that provides funding for innovative programs to teachers in the Rockland School System.

The Hall of Fame committee invites alumni to nominate worthy candidates for the Academic Hall of Fame by going to the Rocklandschools.org website and filling out a nomination form.