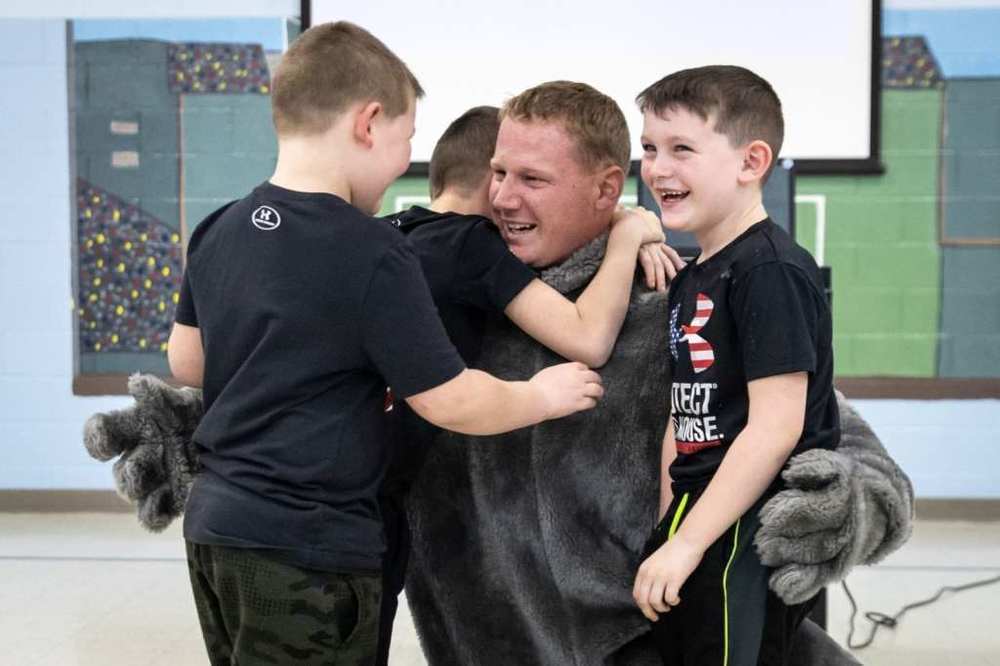 ROCKLAND — Three students at the R. Stewart Esten Elementary School in Rockland received an early Christmas present they’ll never forget today, as their father made a surprise visit to the school following his return from a deployment overseas.

On Friday, with the entire student body gathered in the gymnasium for what was believed to be a routine assembly, Sgt. Michael Leone removed the head of the Rockland Bulldog costume he was wearing and surprised all of those in attendance, including his three sons, Nathan, age 5, Tyler, age 8, and Tolan, age 6.

“The whole surprise went really well, and the kids didn’t see it coming,” said Michael Leone, a member of the 181st Infantry Regiment of the Massachusetts Army National Guard, who has been deployed near the Djibouti-Somalia border since February. “The whole event was really well planned and it was a great feeling to be able to surprise my children like that.”

Esten Principal Marilyn Smith was approached recently by the students’ mother, Brittany Leone, who said she wanted to come up with a way to surprise the boys when their father returned home on Thursday, Dec. 5. Principal Smith decided to include the surprise as part of the school’s monthly awards assembly.

“It was amazing how it all happened,” Principal Smith said. “Our assembly got cancelled Tuesday because of the snow, so we were able to move it to Friday. I called School Resource Officer Ethan Schnabel to see if we could borrow Rocky, our school’s bulldog mascot costume, and it all just came together perfectly.”

The school’s monthly assembly acknowledges students who exhibit acts of generosity and hard work. Near the end of the event, Principal Smith called up Leone’s three children, kindergartner Nathan, first grader Tolan and second grader Tyler, to take a photo with Rocky.

“December is all about kindness, and what better way to be kind to others than to have Nathan, Tolan and Tyler take a photo to send it to their dad, who is really, really far away,” Principal Smith told those in attendance. “I bet their dad would really love that.”

After the photo was taken, Michael removed the bulldog costume head and each of the children immediately recognized and hugged their father. The students in the crowd rose to their feet and cheered when Principal Smith announced to the room the identity of the man in the costume.

“People were screaming, teachers were crying, everything played out exactly how I had hoped,” Principal Smith said. “We have a tradition at this school of supporting our veterans for everything they do, so to be able to have an event like this really meant a lot.”

Michael Leone said his first deployment, which was to Afghanistan in 2011, was difficult given that his oldest son, Tyler, was born about halfway through his deployment. But this deployment was even harder, especially when his sons kept asking when he would be coming home.

“I would be able to talk to them once or twice a week, but being away from all three of them for so long made it really difficult,” he said. “You see stories on the news about surprises like this, but to be a part of one is tough to describe. It hit me yesterday that it was finally happening, and you don’t know what kinds of emotions you’re going to experience. Now that it’s all over it’s awesome to be able to look forward to spending the holidays with them.”

When asked what the experience was like, oldest son Tyler couldn’t stop smiling.

“We had no idea who the bulldog was,” Tyler said. “When he took his costume off we were all confused at first, but then we realized it was our dad. He was finally home.”